Where are the jobs?

Where are the jobs? 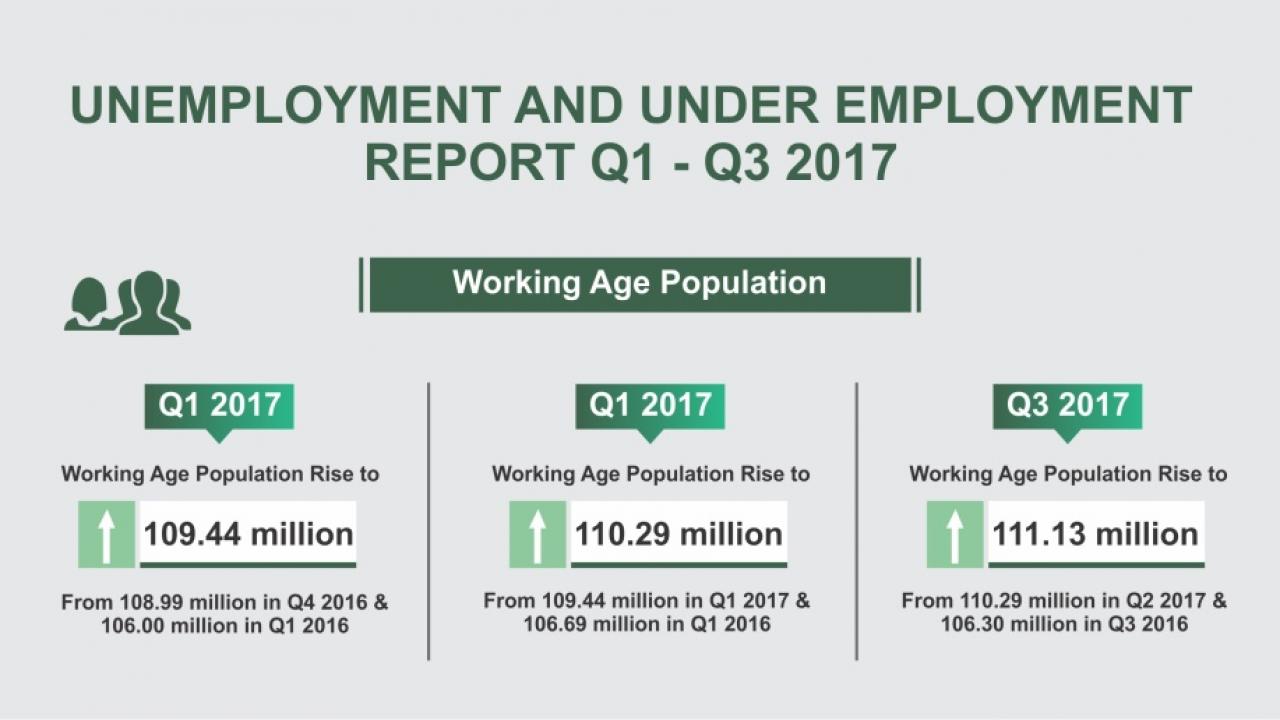 The latest unemployment statistics from the National Bureau of Statistics paint a very grim picture of the growing unemployment crisis in Nigeria. Unemployment has risen to 18.1% and total unemployment and under employment figures) had risen to 40.2%. When the latest statistics were released by the NBS on December 22, there was no reaction from government, no explanation as to why unemployment increased from 14% to 18.1% within months. There was no discussion; neither were there debates or articulation of policy propositions on tackling the challenge.

Given that Nigeria is also listed as the country with the second highest population of citizens living below the poverty line (86 million), the creation of a platform to draw policy makers attention to the challenge, offer credible policy and programmatic propositions, forge collaboration and partnerships between government, private sector leaders and academia, share best practice from other climes and most importantly; attempt to bring a big picture perspective to the discourse, is important.

It is crucial that leaders in government and the private sector understand the enormity of the problem, and urgently begin the process of crafting solutions at a systemic level. At the moment, the job creation initiatives touted by governments at the federal and state levels are mere tokenisms. The Presidency set up a job creation unit which has, in three years, succeeded in employing 200,000 individuals, in a temporary two-year scheme, with a view to taking on a further 300,000 job seekers. In an environment where there are more than 70 million people who are unemployed or under employed (or 86 million, going by the number living below the poverty line), and where more than one million young people continue to enter the job market every year, touting the employment of 200,000 people in a temporary, two-year scheme is dangerously inadequate.

Seen from another perspective, the government’s ERGP has an ambitious target of 20 million jobs created by 2020. The problem however, is the lack of a clear agenda on how this will be accomplished. It does not also appear as if it is a key priority; the government has already identified three priority areas of focus under the ERGP, on which diagnostic and solution finding delivery laboratories will be convened. These include manufacturing, power and agriculture, which are, no doubt very important areas of consideration. Job creation was not considered important enough to warrant a delivery lab! And this in an environment where 86 million Nigerians are living below the poverty line and almost half of the citizens are either unemployed or under employed.

It is possible that the thinking in government circles may have been that by tackling those other elements and removing the barriers to economic growth, job creation will result as a natural and progressive consequence. Sadly, this is not always so. We had a booming economy that kept growing for several years till oil prices slumped. The growth did not result in the creation of jobs, it was actually labelled as a jobless growth. Removing impediments and bottlenecks to economic growth is one step; on its own and by itself, this important step will not automatically result in jobs. Rather, it may result in an increase in the level of skill importation that we have been witnessing over the years, artisans from neighboring countries, technicians from India and other places. We need a coherent and clear-cut policy framework, followed by credible and sensible actions, to start shifting the needle in terms of making a dent on the huge unemployment figures.