Promoting Entrepreneurship in Africa (Part I)

Promoting Entrepreneurship in Africa (Part I) 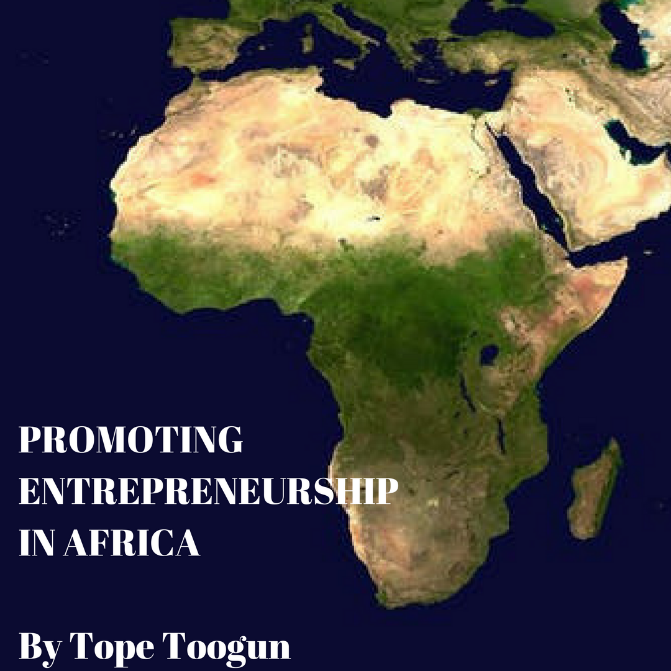 Africa is a continent of contrasts. On one hand, it is seen, and rightly so, as the world’s last frontier where massive development is set to occur. On the other hand, it is probably the most problematic continent; with sit tight leaders, all sorts of wars and conflicts, the occasional natural disaster, high poverty levels and unemployment rates sitting pretty in the stratosphere.

Let’s consider the positives first. Africa has 60% share of the entire world’s total amount of uncultivated, arable land, implying we have the capacity to feed the world at some point in the not too distant future. It has been said that urbanization will drive growth in the years ahead; Africa currently has 52 cities with population of 1 million and above, with projections for more rapid urbanization. The collective GDP of the continent was $2.545 trillion in 2016, with a total consumer spending of $1.4 trillion, projected to hit $4 trillion by 2025.

Our population is also unique in that it is largely youthful, a potential advantage in a rapidly ageing world. 40% of the continent’s population is below the age of 15, with a further 20% at between the ages of 15 and 24. So a whopping 60% of total population is under the age of 24! However, a weak education system and high poverty levels are ensuring that our young people do not possess the skills to enter the labour force or participate meaningfully in economic activities. 60% of the total unemployed population in Africa is in the youth bracket. Economies across the continent are sluggish in creating new jobs but conversely have high rates of churning out graduates annually. This is dangerous, very dangerous. Evidence shows clearly that nations or regions with a” youth bulge”, a spike in the youthful population, may experience instability if there are insufficient economic opportunities. The wave of violent demonstrations known as the Arab Spring which started in Tunisia in December 2010 and swept through North Africa and the Middle East bringing about regime change in some of the countries and causing loss of lives and property in others, was triggered by youth unemployment.  Crime also tends to rise in such environments, as shown by the relatively high crime rates in countries like Nigeria and South Africa, which have significant levels of youth unemployment.

For a continent with 60% of the world’s uncultivated arable land and youthful population, it is ironical that we have very high levels of unemployment. There is a sense of optimism around the world that somehow, we will get our act right and take sensible action to spur growth on the continent. One of the urgent tasks at hand for our policy makers is to deploy mechanisms to deliberately tap into the enterprising spirit of the African man or woman. If we should up skill (or reskill in some cases) the millions of unemployed citizens, there still will not be enough job opportunities in the economy to absorb all of them. Recall the fact that 60% of the population is below the age of 24? This means more people are coming into the labour market than the economy has capacity to absorb them. This is what makes promoting entrepreneurship a necessity, not an option.

We must enable more of our citizens to explore business opportunities, generate income for themselves and provide employment for other people. And this should not be such a difficult thing to do. The 2017 Africa Economic Outlook jointly published by the AfDB, OECD and the UNDP says “The entrepreneurial culture is vibrant with about 80% of Africans viewing entrepreneurship as a good career opportunity. The continent has the highest share in the world of adults starting or running new businesses”

With figures like this, why then is unemployment such a huge challenge in Africa? Well, largely because most of the businesses that are being started in Africa operate in the informal household sector, with low productivity levels which means they barely make enough money to cater for the owner’s needs, and are unable to grow to provide employment opportunities for others.

Mortality rates also tend to be high, with many businesses closing shop within a few years of starting to operate. There is the challenge of operating under very harsh conditions, with limited support and steep cost of accessing credit facilities. Clearly, the “entrepreneurial culture” alluded to in the African Economic Report” is not sufficient. And it appears governments across the continent are realizing this fact and have started to deploy mechanisms and policies to catalyze entrepreneurship development. The Nigerian government mandated tertiary institutions to teach entrepreneurship, several government agencies have been created to support entrepreneurs and banks have also developed products to help would be entrepreneurs get started. In the MENA Region, there are similar programmes such as Injaz Al Arab, Grameen-Jameel, Silatech and Wamda, aimed at curbing high unemployment levels by promoting entrepreneurship. In East Africa, the Kenyan government provides investment allowances that are tax deductible, import and export incentive schemes, provides industrial sheds for light manufacturing to take place, eased the issuing of trade licenses as well as facilitate training, market and networking opportunities. In South Africa; the government, corporate bodies and not for profits are implementing a wide range of intervention programmes and creating support structures, corporate preferential supplier and procurement initiatives, incubators, accelerators, facilitating access to skills development and finance.

In spite of these initiatives, the uptake is still low across the continent and mortality rates of new ventures remain undeniably high.