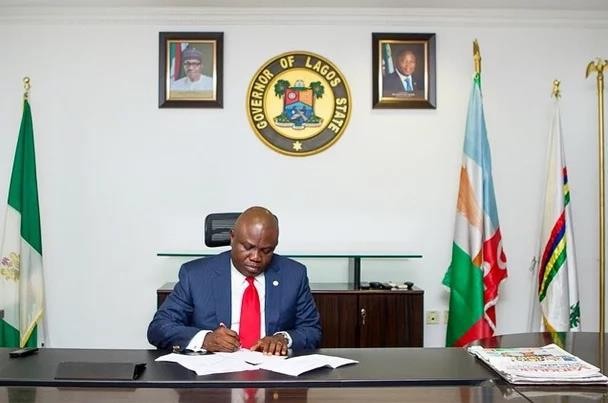 With a vision to be an enabling institution that creates sustainable wealth for artisans in Lagos State, the Governor of Lagos State, Mr. Akinwunmi Ambode revealed Lagos State Government’s plan to officially enhance the economy of artisans and traders through the use of job engagement. A practical example was the making of the beautiful graduation gowns worn by the artisans and tradesmen at the 8th Tradesmen and Artisans Day and graduation ceremony For Re-trained Artisans and Traders, being made by the Lagos State Tailor & Fashion Designers Association.

Mr. Babatunde Durosinmi-Etti, the Honourable Commissioner Ministry of Wealth Creation and Employment delivered the welcome address at the event and showed appreciation to His Excellency, Akinwunmi Ambode for his contribution, commitment, and support to the programme and to the Artisans and Tradesmen. The Commissioner for Wealth Creation and Employment mentioned how the requests made by the artisans last year had been fulfilled. He further mentioned the provision of an annual subvention of 12 million naira for the Lagos State Council of Tradesmen and Artisans.

With the aim to enhance productivity, competitiveness, creativity, and vitality in the sector, His Excellency Mr. Ambode Akinwunmi mentioned the newly commissioned online portal created to promote interactions between artisans, MSMEs, customers, and important stakeholders. The principal role is to make it accessible and fitting for people in demand of great quality service to meet trustworthy and verifiable service providers.

The 1,500 graduates (artisans and traders) this year (an improvement from last year’s 500 beneficiaries), were trained by the Lagos State Council of Tradesmen and Artisans (LASCOTA) in 24 trades including entrepreneurship, computer appreciation, business proposal writing, and many other trades. His Excellency, Mr. Ambode Akinwunmi reiterated the importance of the informal sector to the economic development of Lagos State while presenting the certificates.

Cross section of the Graduates re-Trained Artisans and Traders during the 8th Tradesmen and Artisans week at De-Blue Roof, LTV, Agidingbi, Ikeja, Lagos on Thursday, November 2, 2017.

In addition, He spoke about several initiatives aimed at growing the informal sector such as the N25billion Lagos State Employment Trust Fund (LETF); reassuring the artisans and tradesmen of Lagos State Government’s plan to help in promoting their businesses and in creating favourable environments for their business operations.

Alhaji Nurudeen Buhari, President of Lagos State Council of Tradesmen and Artisans (LASCOTA) applauded the Governor for fulfilling 95% of their request. He further mentioned the most enterprising fulfilled promise as the Lagos State Employment Trust Fund (LETF).

This truly shows that Lagos State is really working towards the growth of the informal sector for the economic development of Lagos State.